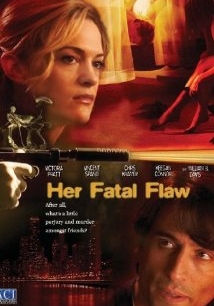 When a high-profile politician is found murdered in a Chicago hotel room, all signs point to affluent local businessman Robert Genaro. His back against the wall, Genaro turns to the only person he feels he can trust - his fiance and rising-star defense attorney, Laney Henessy. As the incriminating evidence unfolds, Henessy is forced to confront the possibility that Genaro is not the man she believes him to be. Laney Henessy begins to question everything in her life as she finds herself embroiled in an intricate web of blackmail, murder, and deceit that threatens to destroy her career and her love. It seems that the closer she gets to the truth, the farther she moves away from the man she loves. In the end, Laney will have to decide who is telling the truth and who is pulling the strings. Will her need to know the truth destroy the life she has built? Will it become 'Her Fatal Flaw'?